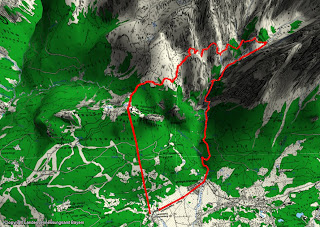 Following the success of the walk in June this year, Juergen and I have planned another tour, taking place on 20th September. The tour will be in the area around the Zugspitze (’s highest mountain) and includes some spectacular alpine scenery. One of the high points is a walk through the Höllentalklamm, a steep-sided gorge where a mountain stream rushes through between the rocks.

HOW TO GET THERE

From you need to drive to , which is best reached along the A95 Autobahn. After the tunnel at Farchant you need to exit right on the B23 and then follow the road through Garmisch, following signs for the Osterfelderbahn and/or Kreuzeckbahn. From the B23 there is a left turn at some traffic lights and then you follow this road over the railway and arrive at the car park for the Kreuzeckbahn.

Allow at least 1½ hours for the drive from .

We will start the walk at 9:00 from the car park at the Kreuzeckbahn, which means that you need to leave by 07:30.

See the maps for more details on the route to the starting point.

From the car park we will walk alongside the railway line of the Zugspitzbahn to the . This is a flat walk of a couple of km. along the valley and will probably take us about 20 minutes.

In Hammersbach we turn left and ascend steeply up a forest road to reach the entrance to the Höllentalklamm. This is an easy ascent of about 300m in height and will take us about an hour.

We then enter the Klamm (cost of €2 per person but with a reduction for DAV members). The path climbs up the gorge alongside the stream, and in some places passes through tunnels blasted out of the rock. There are many views of the rushing water along the way. Given how bad the summer weather has been, I expect that there will be plenty of water in the gorge – if it has recently rained there can be quite a lot of water running down the rocks and dripping in the tunnels, so it’s a good idea to have a waterproof coat on for this part of the trip. I expect that we will take up to an hour to get through the gorge.

Once out the other side, we will carry on to the Höllentalangerhütte. From here there is a lovely view towards the Zugspitze and many people walking to the top of the stay overnight at this Hütte. The location of the Hütte is about 600 m in height from Hammersbach and I estimate we will need about 3 hours to get here from the starting point. This will be a good spot to have our lunch – food and drink can be bought here but you can bring your own sandwiches if you want.

From the Hütte we begin the hardest part of the tour, which is the ascent to the Hupfleitenjoch. We have to ascend about 400m, and some of the steeper parts have metal ropes to help support yourself. Around half way we will pass the Knappenhäuser, after which comes the steepest part of the walk. The Hupfleitenjoch is at about 1750m and is really only a saddle rather than a peak. From this saddle it’s possible to make a short detour to climb to the top of the Schwarzenkopf (1819m), which gives a marvellous view of the Höllental and towards the . For those who don’t want to climb up the Schwarzenkopf, the path follows the contours round until it meets the main path to the Kreuzeck. I expect we will need at least a couple of hours in total to complete this part of the journey – the detour to the Schwarzenkopf will add around 45 minutes to this.

All being well we will reach the Kreuzeckhaus after a total of about 6 hours walking time. From the Haus there is a great view of and up the valley back towards . This is a good place for us to have a drink together and enjoy the surrounding landscape.

From Kreuzeck there are two options: either walk down or take the cable car. The cable car leaves every half an hour up to 17:30 and the cost for a single trip down is €13.50 (although we should get a group reduction if we all take the cable car). The trip takes about 7 minutes. For those who want to walk down, the route is quite straightforward and the descent is around 900m, which should take 1½ hours.

Time required to Kreuzeck: around 6 hours (without pause)

A summary of the walk is attached in German, although this shows the route in the reverse direction, beginning with a cable car ride up the Kreuzeck.

In terms of difficulty, the walk requires roughly the same amount of effort as the one we did in June. The height of the Schwarzenkopf (1819 m) is comparable to that of the Heimgarten (1790 m) which we climbed together in June.